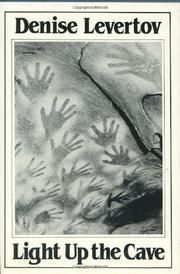 LIGHT UP THE CAVE

A companion volume to Levertov's first collection of miscellaneous prose, The Poet In The World (1973), this collection once more yokes together essays, memoirs, short fiction (undistinguished), and lectures on craft. Though Levertov is not a writer of especially lively prose, though she is sometimes prickly to the point of being abrupt, one is obliged to acknowledge her tremendous integrity: her vocation--poet--is never cutesied-up, never made flashy or merely glib. A dogged tracer-back, she's eager for the first sign of the spring from which her poem will flow; for her, what counts is ""the process of thinking/feeling, feeling/thinking, rather than focusing more exclusively on its results."" She consequently wishes for a more systematic approach to open poetic forms, more attention to ""sounding,"" more awareness of the precise functions of linebreaks, indentation, etc. Nowhere is her concern for the conscious craft but also the unconscious beginnings of poetry more in evidence than in a long exposition of her friendship (and later break) with Robert Duncan. Despite being slightly clipped in tone, the piece is revealing as a record of how two very talented poets interact with and change one another. There is also a lovely, more personal memoir of Levertov's Welsh mother, and one of being a nurse in England during World War II. Appreciations--of Muriel Rukeyser, Hilda Morley, Michele Murray, Bert Meyers--and critical notes (on Rilke, Chekhov) are slighter. But for those well-acquainted with Levertov's opus (a prerequisite here), this is, on the whole, a volume of clear value.