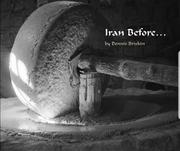 The soulful Iran of a half-century ago comes to life in these luminous photographs.

Briskin was a Peace Corps volunteer in Iran in the late 1960s and took many black-and-white photos in the capital, Tehran, and the cities of Arak, Kashan, Hamadan, Esfahan, and Qom. His various subjects illustrate an older, poorer, less urbanized Iran of small villages and modestly scaled towns powered by animals and human sweat. Many of the images capture everyday work: a barefoot man straining to push a cart piled high with watermelons, a porter teetering along with a platter of food on his head, a silversmith carving a delicately filigreed design of an ancient Persian winged bull on a tray, a youth welding a window grate without face mask or gloves to protect him from the geyser of sparks. There are quiet pastoral scenes of shepherds with their flocks and boys threshing hay as well as bustling scenes of shoppers in bazaars and crowds thronging religious festivals. Women appear, working in headscarves and practical trousers in the countryside and shrouded in demure chadors in cities. And there are numerous grand shots of mosques, with vast arches opening onto cavernous interiors that dwarf worshippers kneeling in prayer. Briskin’s photos are visually striking and have a near-palpable texture. One can almost feel the gnarled, rough-hewn surfaces of a grindstone and wooden axle in a mill or the decorative tiles bubbling out of a mosque wall. The region he photographs is a semiarid plateau, and the landscape of billowing, rocky hillsides is a singular presence in his exterior shots. The ambient light is even more extraordinary in his interiors. Many photos depict dramatic contrasts of dim, shadowed workshops, arcades, and mosque spaces pierced by dazzling shafts of sunlight. The people he photographs are endlessly fascinating—absorbed in their labors; lost in religious transports; trudging through snowdrifts; staring back at the camera with expressions that convey boredom, tension, wariness, and occasional flashes of joy.