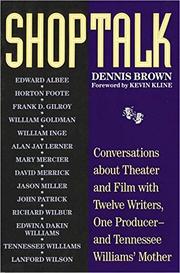 Interview/profiles from the 1970's—when Brown wrote for the St. Louis Post-Dispatch and other newspapers—with mini-updates that don't really manage to dispel the musty aroma of old news clippings. Still, only one of the pieces—a repetitious, maudlin visit with actor/playwright Jason Miller (That Championship Season)- -registers simply as much dated ado about nothing. The other interview-subjects are either important enough, or entertaining enough, to remain at least sporadically engaging. Lanford Wilson discusses the intriguing role of director Marshall Mason in the evolution of Talley's Folly. Frank D. Gilroy, John Patrick (Teahouse of the August Moon), and, especially, William Goldman are amusing on the vagaries of Hollywood filmmaking. Edward Albee, predictably sour, rails at ``the John Simons of the world,'' while forgotten playwright Mary Mercier (Johnny No-Trump) is gently bitter about her far more devastating experience with the New York critics. Superproducer David Merrick is cheerfully straightforward about his flops; Horton Foote is eminently practical about his quiet, productive, multimedia career. There are very sketchy chats with Tennessee Williams and (separately) his mother (no surprises); with Alan Jay Lerner, William Inge, and Richard Wilbur (Broadway lyricist and former poet laureate, warning that ``almost anybody going seriously into musical theater is bound to find himself used and cheated and alienated''). And, throughout, Brown fills things out with quotes from other show-folk—and with his own comments, which range from astute to fatuous to portentous. (On Inge in decline: ``No longer did he know what was his right in his world. No longer was the path clear.'') Minor moments with some major (and not-so-major) talents; diverting and informative in spots. (Fourteen b&w photographs—not seen.)