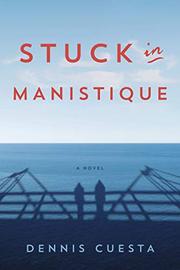 Mark is a 30-something financial planner from Chicago who inherits his long-lost aunt’s house in Michigan’s rural Upper Peninsula, near Canada. He’s extremely phobic about driving on bridges, so he can only reach his late Aunt Vivian’s home in tiny Manistique by closing his eyes and letting a volunteer driver take him across the roughly 5-mile Mackinac Bridge. Emily, a 24-year-old medical school graduate, is traumatized after hitting a deer with her car while lost in thought about an adulterous affair and a mistake that caused a patient’s death. Stranded in Manistique while awaiting windshield repairs, she seeks shelter at Vivian’s house, which is also be a bed-and-breakfast. Mark, the only person there, is caught off guard, but he tries to accommodate her. He soon becomes, in his own words, “the worst innkeeper imaginable.” Cuesta creates an eccentric cast of townies and further houseguests, including a narcoleptic tourist who’s attempting to be the first person to ever drive around Lake Michigan in an electric car. Along the way, he use his characters’ foibles to deliver Fawlty Towers-style farce, as when Mark ineptly tries to hide the demise of an elderly houseguest. But there’s a sober side to the novel, as well, such as when Vivian’s handyman, Bear Foot, starts a fire in the backyard to help Vivian’s “thundering spirit” journey to the next world. Mark only met his aunt once, as a young child, and he knows little about her except that she was adopted, worked as an international aid doctor in war zones, and figured in his memory like a “saint”; he marvels when Bear Foot talks about her Native American heritage. Cuesta ping-pongs between Mark’s and Emily’s stories before smoothly bringing them together as more houseguests arrive and the young doctor discovers a book containing one of Vivian’s essays. Throughout the novel, the author’s descriptions of Upper Peninsula settings are simple yet evocative, as when Mark releases Vivian’s ashes into a lake and they form “a mesmerizing cloud beneath the surface.”