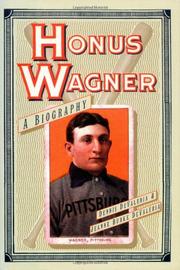 A baseball story too good to be true, written in a style that makes it seem even less probable. Born to a German immigrant family, Hans Peter Wagner was a genial, strapping lad (the nickname ``Honus,'' a corruption of Hans, was a German term of endearment for a big awkward kid) who grew even more physically prepossessing by working in the mills and mines of western Pennsylvania. Breaking in with the Louisville Colonels of the National League in the 1890s, Wagner showed great prowess with both bat and glove. He could play at any of the eight field positions, although his regular spot was at shortstop. (He is considered by many to have been the greatest shortstop ever to play the game.) At the turn of the century Wagner's team was bought by Barney Dreyfuss, a genial businessman who moved them to Pittsburgh, where Honus would spend the balance of his life and career. Dreyfuss's largesse (he regularly treated his teams to vacations whether they won the pennant or not) was a marked contrast to the penurious owners of the early 1900s. And as baseball's pinnacle attraction and the centerpiece of several championship teams, the loyal and hardworking Wagner gave Dreyfuss few chances during their long relationship to regret his generosity. After finally hanging up his spikes in 1917, Wagner—owner of several Major League records—entered a golden retirement during which he coached for the Pirates and was among the first players inducted into the Hall of Fame. This book does explode some prominent myths, most notably that Wagner forced a cigarette maker to withdraw a card bearing his likeness because of his disdain for tobacco (Wagner was, in fact, an inveterate chewer and cigar smoker who may have dismissed cigarettes as too ``lady like''). The authors (members of SABR, the Society for American Baseball Research) divulge little, however, in their hagiography about how Wagner changed the game, or vice versa.