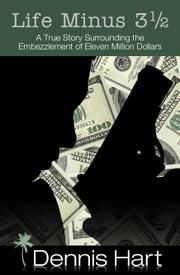 A True Story Surrounding the Embezzlement of Eleven Million Dollars

A habitual gambler recounts a life of bad decisions in sports books and corporate embezzlement, and the effect it had on his family.

No one’s saying Dennis Hart had it easy. A father at 17 with an unstable girlfriend and bills to pay, he shelved his nascent college career to begin life in the working world. There—facing dire straits that many of us have encountered at one time or another—Hart gave in to the first of many opportunities to bend the law and profit while doing so. From there, despite his lack of formal training, Hart was skilled enough as an accountant to land jobs in numerous financial departments at mid-sized companies. When he and two colleagues began their own precious-metals company (and Hart began a separate travel agency), he developed the means and the structure to begin cashing illegal checks to support his gambling habit. His sports bets—and the Hollywood-named hustlers who are on his tail—continue to multiply while he draws money from his companies and conceals the misdeeds on the balance sheet. As Hart juggles this downward-spiraling mélange of family, lawyers, hustlers and hit men, Hart’s readers will feel the stress once corporate managers finally notice the balance sheet irregularities. The inherent suspense throughout contrasts well with Hart’s candid and effortless writing style; he recounts every mistake from a refreshingly honest and self-effacing perspective. What may strike readers most is the ultimately tragic nature of Hart’s story. A handsome, intelligent, charismatic man, he seemed to have the world at his feet. But a series of bad decisions and weakened resistance to temptation sent him down a path that twisted toward lifelong infamy. In a moment of bleak anguish, Hart describes his future wife agreeing to a first date with him: “It would prove to be the worst decision she ever made.” In the end, perhaps Hart’s greatest victory is keeping his wife, his dream of Florida and his readers on his side.

Recommended both as a suspenseful story and a cautionary tale of yielding to temptation.