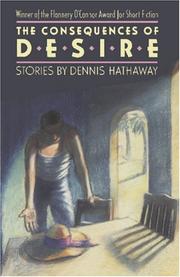 THE CONSEQUENCES OF DESIRE

In Hathaway's first collection, winner of this year's Flannery O'Connor Award, Californians discover both literally and figuratively that the ground they stand on is as insubstantial as ``the skin of a colossal pudding.'' In the title story, when a successful lawyer saw the woman he loved during hippie-commune days, ``...he was engulfed by a wave of desire—hot, impatient, adolescent—that began to corrode to a sense of unease,'' a reaction typical for the contemporary men of these pieces. Though nervously drawn to Latina servants and cranky, aspiring actresses, they usually marry appropriate professional women and then are often left to flounder emotionally. In ``Space and Light,'' an architect whose psyche unravels finds his lawyer- wife listening to him ``the way she must listen to a witness'' and replying in a ``cool and neutral tone.'' Much of the characters' uncertainty here derives from their sense of privilege, their inevitable political awareness, as well as from their mixture of attraction to, sympathy for, and resentment and suspicion of the Mexicans and Central Americans they desire, marry, drink with, or hire to keep house and dig ditches. Two stories center on young women: a convincingly unhappy adolescent in ``I Like Rap, Don't You?'' and, in the fairly silly ``The Girl Detective,'' a college student who practices the ``pure science of detection,'' following suspicious-looking people ``at a discreetly professional distance.'' Hathaway, who owns a construction company, casts an informed sympathetic eye on tile-setters, electricians, day- laborers, and contractors' wives. Few memorable stories, but an occasional real charge through Hathaway's pleasantly self-conscious intellect.