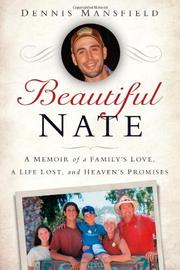 A Memoir of a Family's Love, a Life Lost, and Eternal Promises

An evangelical activist's account of the troubled relationship between his family and his rebellious, drug-addicted son.

Mansfield was determined not to make the same mistakes parenting his children that his own well-meaning but distant father made with him. When his first child, Nate, was born, he vowed to engage in the kind of "intentional parenting" that would help him acknowledge Nate's "personal worth and value” on a daily basis. He and his wife worked hard at creating what they believed was a happy life for Nate, which included bedtime stories, road trips and plenty of family celebrations. But what Mansfield didn't realize was that by being so child-focused and not letting Nate (and later, his two younger siblings) "own their feelings" during moments of conflict, he was unwittingly modeling selfish and self-centered behaviors to his children. This in turn manifested in such unwanted behaviors as vicious fights between Nate and his sister, who at times looked and sounded as though "they were auditioning for roles in Lord of the Flies.” All three of Mansfield's children eventually learned to love God, but it was his eldest son who began to use drugs and challenge authority. Nate's descent into addiction led to run-ins with the law and, later, a felony conviction for drug possession. The greatest tragedy, though, came after his release. Just when Nate had made a commitment to changing his life, he died, a victim of prescription drug abuse. Mansfield takes much of the blame for what happened to his son, but as he does so, he also suggests that the child-centered approach to parenting endorsed by the Christian community may have been flawed.

Candid and heartfelt, though at times penitential in tone.