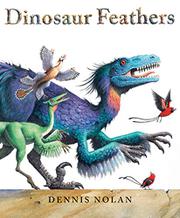 Viewers get ringside seats as dinosaurs march past in an evolutionary parade, giving way to their modern avian representatives.

Nolan crafts a rhymed cadence that is itself an achievement—“Ceratosaurus / Allosaurus / Archaeopteryx / Mamenchisaurus / Kentrosaurus / And Caudipteryx”—but pales next to the brightly patterned, hyper-realistically detailed, and, increasingly often, gloriously feathered dinos marching by the dozens in close company across spacious pages. Just over halfway through, a flaming asteroid descending in the background signals a sudden change to an equally magnificent, more-contemporary cast whose feathers likewise “grew, and grew, and grew. / Flamingos, Owls, / Guineafowls, / And the Marabou.” The portraits are all full-body, rendered (at least roughly) to scale, and with a low or level angle of view that sets them off to fine effect. Dino names throughout are matched to phonetic spellings, and a visual index at the back offers additional quick facts for every marcher. Following the image of a sinuous tree of life being studied by a racially diverse group of human offspring, a final rank of sprightly sauropod hatchlings fondly supervised by a humongous parent finishes off the parade on a homey note.

A prehistoric progress that takes flight in more ways than one.