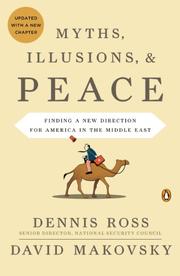 Finding a New Direction for America in the Middle East

by Dennis Ross and David Makovsky

Bush I and Clinton peace negotiator Ross (Statecraft and How to Restore America’s Standing in the World, 2007, etc.) and journalist Makovsky (Making Peace With the PLO: The Rabin Government’s Road to the Oslo Accord, 1995) seek to correct some fallacies about the Middle East.

No Arab government, the authors write, protested when, in 2007, Israel bombed a nuclear reactor that Syria was building. That, they explain, is because “most Arab governments want Israel to be strong when it comes to Iran, Hizbollah, Hamas, and Syria,” and because most of those governments mistrust Iran as a potential threat with designs on, among other things, Arab oil. Setting aside the tedious construct that all official American thought vis-à-vis matters Middle Eastern has been marred by myths and illusions—the corollary being that only this book is correct on such things, much too daring a claim—Ross and Makovsky venture some Machiavellian divide-and-conquer strategies that have the potential to solve multiple problems at once. Everyone wants peace between Israel and Palestine, for instance, except for a certain percentage of radicals on both sides. Peace would have the further benefit of depriving the radical fringe in the Arab world—at whose extreme stands al-Qaeda, as well as Iran—from having a unifying cause to complain about. Forget the old orthodoxies about linkage, the authors write. When it comes to outflanking Iran, purity of procedure is less important than effective action. Hybrid approaches, they write, are more realistically situated than the triumphalist claims of the neoconservatives who brought us the Iraq War. On that note, they write, “the Bush years have left a woeful legacy: the forces that reject peace are far stronger than they have been…[and] the forces favoring coexistence are far weaker.” Yet the authors express hope that a new administration might make headway in securing America’s interests in the region.

Though mostly addressed to the inside-the-Beltway crowd, Ross and Makovsky’s book merits wider attention—and is sure to tick off certain readers in Tehran, Damascus and perhaps Tel Aviv.