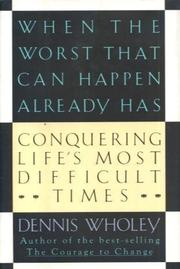 WHEN THE WORST THAT CAN HAPPEN ALREADY HAS

Interviews with numerous individuals, many of them celebrities, on how they have coped with adversity. Interviewer Wholey, former host of PBS's Late Night America and author of Are You Happy? (1986) and The Courage to Change (1984)—which used celebrity interviews to explore happiness and alcohol, respectively—has edited out his questions here, believing they would intrude on the ``truly inspirational'' stories his subjects have to tell. The result, though, is an often curiously flat narration of some absolutely awful personal experiences—incarceration in Auschwitz and Dachau, devastating illnesses, disfiguring and disabling accidents, etc. Among the celebrities who speak with Wholey are Jim Brady, brain-damaged in John Hinkley's assassination attempt on President Reagan, and Betty Ford, who has faced both cancer and drug addiction. Wholey also talks with Robert Bork, who lost his bid for a Supreme Court seat; former American Univ. president Richard Berendzen, who faced disgrace after making indecent telephone calls; and Nixon advisor Charles Colson, sent to prison during the Watergate investigation. The author's arrangement of his subjects' stories into such categories as ``Suffering,'' ``Loss,'' ``Attitude,'' and ``Acceptance'' appears somewhat arbitrary but does give him room, in brief introductions, to insert his own insights into facing personal disaster. The penultimate section, ``Support and Wisdom,'' excerpts comments from various interviews and intends to be morale-boosting, while the last section, ``Final Thoughts,'' could have been called ``Random Thoughts''—it contains brief pieces by assorted experts on AIDS, the rights of the disabled, and the hospice movement, as well as an unfocused essay by Secretary of Health and Human Services Louis Sullivan. Even with the celebrity gloss, essentially uninspired and uninspiring.