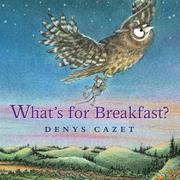 When an owl stops to consider the words of a mouse, it changes his point of view and improves his swooping skills.

Beware food that talks back! When Pip tries to swoop toward the base of the oak to scoop up a mouse for Rufus’ mush breakfast, he falls on Theodore the mouse instead. “That was more falling than swooping,” the rodent points out. It’s the beginning of a rather lengthy (for one that occurs between someone who is supposed to be catching dinner and someone who is meant to be dinner) conversation (and perhaps friendship). Theodore has given flying a lot of thought, and he shows Pip where he should practice his swooping—above the tallest trees where it’s windiest. Pip flies off with Theodore in his talons to test the hypothesis. Pip’s swooping—and Theodore’s ride—is glorious, the illustrations showing the two above gorgeous sunset scenery. At the end of the flight, though, Rufus’ hooting brings the two back to reality and the problem at hand. Luckily, Theodore has a solution to that as well. Cazet’s pictures have an old-fashioned aesthetic, but there is a somewhat jarring clash between the fairly realistic backgrounds and the cartoon characters. (Theodore’s front stoop, a tidy arched doorway at the base of an old oak tree, is darling, though.)

Pip’s parting thought is a lesson for all: “Pip wondered what else someone as small as a mouse might know.” It’s delightfully elastic, too, for readers encouraged to think beyond the animal kingdom.