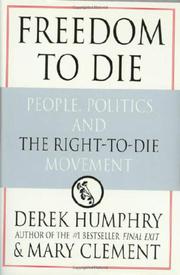 People, Politics and the Right-to-Die Movement

Effective advocacy journalism offered in defense of physician-assisted suicide (PAS). The authors maintain that PAS —is an idea whose time has come.— Humphry, founder of the Hemlock Society, has written numerous works, including Final Exit, 1991; Clement’s an attorney for right-to-die cases. They define PAS as the consequence of a dying patient’s request for self-administered lethal drugs obtained from a doctor. As their book argues, social and technological changes have made the public relatively receptive to the practice. Technology, after all, can postpone death perhaps indefinitely—but often at the cost of leaving a patient in extreme mental and physical pain, or even in a “vegetable” state. Emerging from the —rights culture— of the 1960s, patients have increasingly demanded the freedom to choose the nature of their death in the face of this dehumanizing technological alternative. Poor end-of-life care, such as pain management, by physicians has also given impetus to the PAS movement. The authors discuss these issues with great care. They offer a history of the movement, particularly the recent legal and legislative struggles over PAS. They also discuss the powerful organized social forces opposed to PAS. This is, in short, an exhaustive study, useful regardless of whether one supports or loathes PAS. Flaws, however, do weaken the authors— case. They insist that 70 percent of Americans support PAS, yet base this number on a single (!) poll. They dismiss hostility to PAS as due merely to a benighted —establishment—; this conclusion is unlikely to win sympathy from anyone with genuine moral qualms concerning PAS. Finally, while their critique of end-of-life care is devastating, they dodge the idea that perhaps we should put more of our energies into reform of such care, rather than into the effort to legalize PAS. A troubling, informative work of potential significance to everyone. (Author tour)