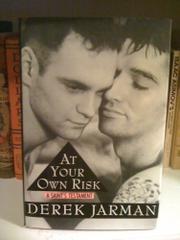 AT YOUR OWN RISK

Patchy memoir by gay British filmmaker Jarman, who tested HIV- positive five years ago, has survived a handful of illnesses, and is still going strong. Jarman covers five decades here, at times attuning his voice to each period. The story, what there is, often melts down into gay commentary, and we never get a satisfying history of the author's films (Sebastian, Caravaggio, Edward II, etc.), his filmmaking, or incidents tied to filmmaking—although a few reviews are reprinted and answered, along with gay manifestos, some by Jarman. This is as much a cannon blast as a memoir, and some bitterly juicy quotes can be lifted from the text (``Understand that if you or I decide to have sex, whether safe, safer, or unsafe, it is our decision and other people have no rights in our lovemaking''), with Jarman wanting to forget his illness and make love blithely with seemingly whomever is pleased to have him. One idea often repeated is that all men are homosexual and that heterosexuality is the deviant form of sex. As Jarman puts it: ``It eventually dawned on me that heterosexuality is an abnormal psychopathic state composed of unhappy men and women whose arrested emotions, finding no natural outlet, condemned them to each other and lives lacking warmth and human compassion.'' He describes rigid British laws anent homosexuality and states his belief that there should be no age of consent, that homosexuality begins when it begins and should not be locked up in legalities. Jarman laments dead friends carried off by AIDS, defends his movies, and gives the fist to moral censure. Past fear, he fights on. For readers fresh to the fray, the title tells all. (Eighteen b&w photographs.)