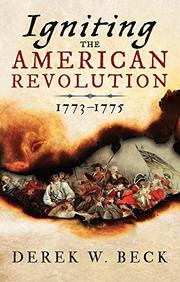 A descriptive account of the people (both rebel and loyalist) and events that propelled the great rupture with Britain.

The period between the Boston Tea Party of December 1773 and the long siege of Boston in 1775 frames this finely delineated history of the buildup to revolution. Former Air Force officer and debut author Beck evidently relishes his subject, and he gives a fully fleshed portrait of the major patriots, both American and British. Dumping the tea in Boston Harbor was an act of destruction of private property, a notion no less sacred to the Americans than their liberty, and though many condemned the vandalism, the resistance to the tea duty had grown among the public as another instance of Parliament trying to “force-feed America a tax it had never consented to.” Fearful of the mob mentality that seemed to be brewing, Gen. Thomas Gage recommended to King George III that regiments earmarked for New York to keep order in Boston would be sufficient to render the Americans docile: they were “Lyons, whilst we are lambs,” he wrote. Little did he know the machinations already put in place by these “sly, artful, hypocritical rascalls [sic],” wrote Gen. Lord Percy of the rebels. Indeed, as Beck moves through the increasing lawlessness of the colonists, he points out the “ugly but very real side” to the American Revolution: “the American rebel seemed at times to take on the role of villain, turning the British into the victim.” The author explores the top-down intelligence network of Gage versus the grass-roots organization of the rebels, each effective in its own way. Beck’s description of the “spreading flames of rebellion” and the taking of the forts at Crown Point and Ticonderoga is as engaging as fiction.

A knowledgeable, elegant account full of elaborate depictions, complete with a thorough bibliography.