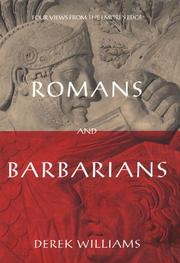 In an erudite look beyond the Roman Empire’s walls (which he traced in The Reach of Rome, 1997), freelancer Williams examines the frontier of first-century Rome from the Roman perspective and, more speculatively, from the viewpoint of nearby barbarian tribes. After the creation of the imperial Roman state, the frontier became a critical bulwark of pax Romana against barbarian tribes, who lived in a preliterate and Iron Age culture. Without a barbarian literature, Williams is limited to Roman viewpoints, of which he chooses four. The first is that of the poet Ovid, exiled by the emperor to the Black Sea for an indiscretion that can only be guessed at, who left grim narratives of savage head-hunting Sarmatian nomads. Williams’s second subject is Quintillius Varus, a lawyer, who led the Roman legions into one of the empire’s greatest disasters at the hands of German barbarians, the Battle of the Teutoburg Forest in 9 a.d. Varus’ legendary defeat at the hands of Armin (traditionally, Hermann or Arminius), a German tribesman and former Roman legionary, showed Roman hubris and overconfidence in Roman arms at their worst, and halted Roman incursions into Germany. The historian Tacitus is a primary source for information on the Varian disaster, as well as on Williams’s third subject, the conquest of the Celtic Britons at the hands of Claudius and Agricola. Finally, Williams uses Trajan’s triumphal sculpture at the heart of Rome as a launching point to discuss his conquest of Dacia on the Black Sea. Though the frontier created by Roman conquests seemed strong enough in the first century, Williams shows that it created a permanent problem for Rome—the continual presence of alien tribes. Two societies, one historic, the other prehistoric, coexisted uneasily, and as Roman military power weakened, the two transformed each other to make possible the creation of Europe. A vivid picture of the clash between ancient civilization and prehistoric cultures. (8 maps, b&w photos, not seen)