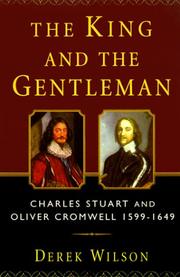 THE KING AND THE GENTLEMAN

Veteran historical biographer Wilson (The Astors: Landscape with Millionaires , 1993, etc.) takes a long look at England’s Charles I and the man who ultimately caused his downfall. Oliver Cromwell and Charles Stuart had little personal contact, and there is no detailed record of any meeting between them. Nonetheless, Wilson pens interesting portraits of the Scottish-born king whose religious and economic policies tore apart Great Britain and the zealous Protestant who rose from Member of Parliament to leader of the victorious “Ironsides” force and of the New Model Army, as well as signatory of Charles’s death warrant. In separate biographical sections, Wilson does an admirable job of covering the complex religious and political schism that rocked England and Scotland, and summarizes for general readers the wealth of extant material on both men’s lives. But his attempts to contrast the two men’s personalities, upbringing, education, and beliefs programmatically are unexceptional. Placing his subjects in specious proximity to each other’s spheres of action, Wilson takes leaps that his sources cannot support, often guessing at their motives and perceptions, as when he asserts that prior to their first meeting Cromwell saw his monarch only in the context of his —royal mystique” and that the King had no real knowledge of his Puritan opponent. Better as two good biographies than one mediocre one. (16 pages b&w illus.)