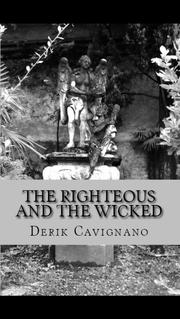 THE RIGHTEOUS AND THE WICKED

From the author of Where the Dark One Sleeps (2002) comes the story of an accountant who’s drawn into the clutches of a cult bent on reshaping the world.

In Boston, accountant Jacob Hanley is about to enjoy a restaurant meal when an old man stumbles in. Jacob catches the flailing man and is told to “Beware the Order,” the “plane of Symbios” and “the Great Elder.” Rattled as the man dies, Jacob assumes the ordeal is another of God’s sick pranks, like when his wife, Megan, died from a sudden aneurysm over a year ago. Later, Jacob realizes that he absentmindedly picked up a stranger’s ID from his table in the restaurant, and the 30-year-old stranger—Charles J. Riggs III—has the same piercing eyes as the old man. Jacob’s brother Ray, a police detective, agrees to investigate and learns that the old man was in fact Charles Riggs, a microbiologist who worked for Symbios Innovations. After muggers snatch Riggs’ ID, Jacob can’t resist checking out Riggs’ residence. He finds a computer document named SX4 and emails it to himself. From there, the accountant falls deeper into the deadly realm of an age-defying cult run by the powerful Great Elder. Author Cavignano brings wonderful characterization of people and places to his lightning-paced fantasy thriller. Jacob is a sympathetic widower who’s cut himself off from friends; he’d be totally lost without family. Boston neighborhoods are impeccably portrayed, like the North End’s “white-haired old men sitting in folding chairs outside tiny groceries.” There’s some enjoyable sci-fi, too, as with the Great Elder’s intelligence-enhancing formula that creates “an explosion of glial cells to support a host of new neurons.” But when readers finally encounter the menacing phenomena at the heart of the narrative, they may feel shortchanged. Religion and environmentalism also have a strong presence in the adventure, yet the goons-and-guns elements overshadow them; perhaps a sequel will explore the heavier topics more fully. Cavignano’s overall execution is nevertheless quite entertaining.