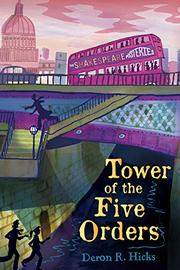 TOWER OF THE FIVE ORDERS

From the Shakespeare Mysteries series, volume 2

Colophon Letterford and her cousin Julian tour Oxford and Cambridge and take to the London sewers to find whatever it takes to refute claims that the family’s new-found Shakespeare manuscripts are fraudulent.

This sequel to The Shakespeare Mysteries (2012) opens with a 16th-century prologue starring a soon-to-be-dead Christopher Marlowe, but the action really begins in a storage locker, where the man hired to catalog the manuscripts is revealed to be a thief. The camera then shifts to Coly’s home in Georgia shortly after the cousins’ last adventure. The cataloger has announced that the documents may be forgeries. Once again, a man identified only as Treemont is scheming to take control of the family publishing company. Readers will be justifiably confused by this array of apparent bad guys. When Coly leaves for London, however, her adventures prove to have been worth waiting for. Cutting suddenly from one perspective to another, this modern mystery makes use of Internet connectivity and old-fashioned stealth snooping. What began as a mystery ends with found treasure, and an epilogue seems to offer grounds for yet another installment. Each chapter opens with a word that Shakespeare coined or first used; an appendix provides the context for the word. It’s a pity there isn’t a more substantial explanation about the posited Shakespeare/Marlowe connection, though.

While the adventure may be worth the wait, Hicks would be well-advised to tighten up his next book.