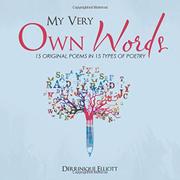 MY VERY OWN WORDS

Elliott, a Bahamian poet, wrote each of these poems in a different style, from lyric and ode to haiku and sonnet. Less common forms, like the “diamante” (a seven-line poem shaped like a diamond), also appear here. Elliott touches on her love of words and the piano; she conjures a hungry boar in limerick form; and she frequently places her poems in the natural world. In a riff on the color green in “Verde,” she writes: “Green is everywhere. / Green is a sign of life. / Green is glimmer of hope. Green is permission to move forward.” A pair of poems in sonnet and ballad forms explore the agony of unattainable love. In the free-verse “My Heart is a Stone,” the author meditates on the aftermath of heartbreak: “God please, / I know You’re the only one with the power to melt my frozen heart / (I’m below zero degrees).” An epic poem flirts with sci-fi as a guardian endures the pain of a broken arm because his father, “a drill sergeant from the underworld,” taught him to protect the women in his care no matter what. Throughout the collection, Elliott deploys clever turns of phrase. In the narrative poem “I Am,” for example, the poet embodies the voice of sound itself: “I come from anything. / I can be pleasant or disturbing;” and in “Skyward Wishes” she evokes a smile with “I wish I was a wish. / Then everyone would want three of me.” Comparisons, however, tend toward the unoriginal, e.g., the “smooth ivory keys” of a piano or a cloud that’s like a “puffy cotton ball.” And characters are ill-defined. In “A True Guardian’s Strength,” a guardian, a captain, and a mistress are mentioned by title only and afforded few attributes. Assuming this book is meant for fellow novice poets, it would have been helpful if Elliott stated the rules of the forms used. (For example, that a sonnet is 14 lines and has rhyming schemes.)

A first-time author’s poetic experiment that samples a wide breadth of forms at the expense of depth.

WHY POETRY
by Matthew Zapruder
Indie