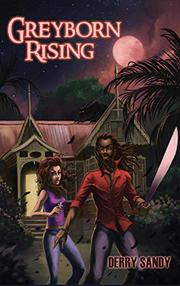 In Sandy’s debut fantasy novel, the last surviving member of a Trinidad-based group must stop evil from sweeping civilization.

Trinidadian Le Clerc is a member of the Order, which hunts paranormal menaces from a magical realm called the Grey. On a recent mission in the Paria forest, Rohan—along with his cousin Dorian; his grandfather Isa; and fellow Orderman Kimani—battled the werewolflike lagahoo. All the members of the group were killed except for Rohan despite the fact that all had enhanced senses, stamina, and reflexes. Now he’s the last living member of Stone House, which works alongside Wood and River Houses under the guidance of the Watchers’ Council. They keep track of breaches from the Grey into humanity’s realm, known as the Absolute. (A third realm, the Ether, contains heaven and hell.) The morning after laying his relatives to rest, Rohan patrols the trails surrounding Stone House. He’s shadowed by Voss Prakash, who was sent by the Watchers to protect Rohan until he can appear before the Council to report on Isa, Dorian, and Kimani (whose body, it turns out, is missing). At the Council’s behest, Rohan and Voss join forces with Lisa Cyrus, an inexperienced seer. Together they must stop Lucian, an “obeah man,” or sorcerer, who wants to merge the Grey and the Absolute, pitting humanity against primal forces. Sandy crafts a ghoulish tale from elements of Caribbean folklore and shows a great love for gory action. History plays a vital role, as well, as scenes set in the early 19th century depict plantation culture and add weight to the brief appearance of Katharine, a helpful “soucouyant,” or blood-drinker. Characters such as Tarik Abban, a young pickpocket, and Clarence Jeremy, a terminally ill sex worker, represent more realistic horrors of city life. The author truly excels, however, in his meticulous plotting involving supernatural elements. Artifacts such as teleportation boxes and creatures such as the gigantic Moongazers generate entertaining mayhem. There are also moments of unnerving prose, as when “Fat grubs with black beady heads” were “hitting the ground...like rain on leaves,” which make this an unforgettable read—and Sandy, a name to watch.

A masterful tale that illuminates terrifying creatures in Caribbean lore.