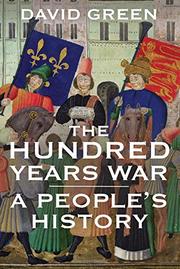 In this new, refreshing look at the Hundred Years’ War, Green (Edward the Black Prince: Power in Medieval Europe, 2007) examines the resulting reconstruction of European culture.

“The crucible of war forged and reforged the English and French nations into something new,” writes the author in this illuminating history. This war, or series thereof, lasted from 1337 to 1453, with interruptions for short terms of peace, famine, civil strife in France and the Black Death. During that time, there would be changes everywhere, but the war began as a feudal and dynastic struggle, as Edward III of England laid claim to the French crown. It ended with a new sense of national identity in both countries as they sought to maintain or reclaim territory, particularly the former Angevin possessions that covered most of modern-day France. The English dominated the first half of the conflict with major victories at Crécy, Poitiers and Agincourt. During the reign of Henry V in particular, the goal was to eliminate any and all support for the French king. This the English accomplished by a grande chevauchée, a calculated destruction that progressed from Bordeaux to Narbonne, depriving the French king of not only manpower, but supplies and tax income. The Hundred Years’ War also significantly affected the scale of knightly ransoms, which changed ancient codes of chivalry, class divisions and feudal service. Suddenly, artillery and the longbow were more important that the cavalry, and since the archers and infantry were predominately peasants, the days of feudalism were on the wane. The war both emphasized and created differences between the two countries, which shared hundreds of years of common history.

Green holistically explores aspects of the war’s effects with exceptionally thorough research on subjects as diverse as the Catholic Church, women, peasants and even language.

AS A BLACK PRINCE ON BLOODY FIELDS
by Thomas W. Jensen
Nonfiction