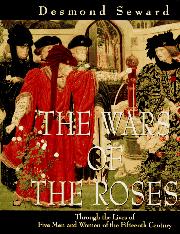 THE WARS OF THE ROSES

Seward (Metternich, 1991, etc.) retells the story of England's 15th-century dynastic struggles by focusing on five of its most colorful protagonists. The Wars of the Roses were fought between 1455 and 1487 to decide which branch of the English royal family should reign: York, headed by Richard Plantagenet, or Lancaster, led by Henry VI. Several studies have recently come out on this chaotic period (see Alison Weir's The Wars of the Roses, p. 848); Seward says that the structure of his book was inspired by Barbara Tuchman's A Distant Mirror. He introduces us to William Hastings, who rose to become the most influential man in England only to be executed by Richard, Duke of Gloucester (later Richard III), because Hastings could have protected the duke's nephews, known as the ``Princes in the Tower.'' We meet John de Vere, Earl of Oxford, who was forced to flee abroad, turned pirate, was imprisoned for ten years, and eventually helped defeat Richard at Bosworth Field. There is Lady Margaret Beaufort, mother of Henry Tudor (later Henry VII), who financed her son's invasions and forged the vital alliance that toppled Richard. We follow the long career of political cleric Dr. John Morton, who eventually worked for Richard's defeat and became cardinal archbishop of Canterbury, chancellor of England, and mentor to the young Thomas More. And there is Jane Shore, daughter of a London merchant, who was mistress to some of the most powerful men in the country but ended her days begging in London during the reign of Henry VIII. Seward's fast-paced narrative is a happy mix of detail and anecdote, given color by apt quotations from contemporary sources and by the author's mastery of the English language. An attractive account of a complex and significant period in English history. (8 pages color illustrations, b&w illustrations, not seen)