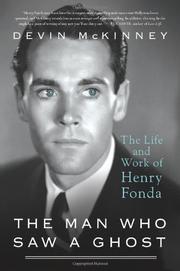 THE MAN WHO SAW A GHOST

The Life and Work of Henry Fonda

The story of a great American actor whose art was burnished by an anguished life.

For McKinney (Magic Circles: The Beatles in Dream and History, 2003), Henry Fonda (1905–1982) is very much a mystery: an affable common man on screen whose piercing blue eyes suggested dark depths. It was a face of wisdom and pain, which is why no one else has ever played Abraham Lincoln with so much quiet conviction. Fonda knew suffering, and he was the cause of suffering in others. He saw death up close—as a youth in Nebraska (where he witnessed a mob take over a local jail and lynch a black man) and as a soldier in World War II and in the suicide of his wife, Frances, a wealthy heiress who finally wearied of the demands of being Mrs. Henry Fonda. (A third wife, Susan Blanchard, would also divorce him for “extreme mental cruelty.”) Though well liked as an actor, he was chilly and distant as a husband and an apparent controlling terror to children Peter and Jane. He may not have liked himself that much either, as there were possible suicide attempts of his own. Through it all, Fonda greeted every struggle with either stoic Christian Science hardiness or dogged denial, plunging into work to keep from dealing with the domestic turmoil. The face said it all. No one ever had a problem believing him as an actor. “Fonda’s fate all along, his curse and his cure, has been to become the thing that haunts him,” writes the author in this excellent work of biography.

In rich, lyrical prose, McKinney deftly honors both the man and the mystery.