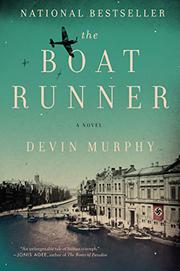 An ambitious coming-of-age story centered on a Dutch family dealing with personal tragedy and the German occupation during World War II.

It’s the summer of 1939, but the rumblings across Europe barely reach Jacob Koopman, Murphy’s 14-year-old narrator, as he enjoys the prosperous life that his father’s light-bulb factory has brought the family. He’s close to his year-older brother, Edwin; has a tattooed rogue in his Uncle Martin, who runs a fishing boat on the North Sea; and even enjoys a stint at a Hitler Youth camp, where the father sends the boys to curry favor for a big deal with Volkswagen. Then Hitler invades Poland on September 1. Edwin disappears during an air raid, and the father must flee when his industrial sabotage is discovered. Uncle Martin enlists Jacob in violent actions against the Germans that disturb the boy, but it’s a Royal Air Force raid on his hometown that persuades him, just shy of 18, to enlist in the German army. There he finds himself in a naval program involving midget submarines carrying a single torpedo and sent off on solo missions with what turn out to be rather low chances of success. At a critical moment, Uncle Martin reappears. Murphy throws so much at this impressionable, tormented Dutch teenager that it’s a wonder he doesn’t crack up. When he finally comes to question loyalties once rooted in family and country, he has embarked on a trek across Europe and another string of engaging adventures. The ending—or endings—may well provoke anything from quibbling to all-night debate.

Murphy’s debut novel is a purposely limited view of war, as was The Red Badge of Courage, but strong characters and compelling narrative convey the impact well beyond one family. An impressive debut.