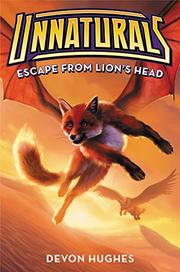 From the Unnaturals series, volume 2

In a futuristic city where the wealthy live in high towers above the poisonous air and citizens are entertained by death matches between hybridized animals, two teens defy the government in hopes of changing their world.

Marcus Lund, an idealistic resident of the Sky Towers, and Leesa Khan, a street-smart inhabitant of the underground community of the Drain, work together to free the hybridized animals from NuFormz, the evil corporation responsible for their mutations. Castor, half–German shepherd and half-eagle, must lead his band of misfits through the broken city toward the Greenplains. But along the way, they will need to fight mutants determined to kill them and humans determined to recage them. Only Kozmo, a combination of bat and fox, holds some clue about what the future may have in store. This clever dystopic fantasy successfully juggles a host of both human and animal voices. The exploration of subjective morality gives this story heart and a unique depth. However, diversity resides primarily with the animal characters; Richardson’s chapter-head illustrations represent both Marcus and Leesa with white skin, and aside from her last name, there’s no real indication of ethnicity or race. While the government’s evil machinations feel over-the-top, the combination of endearing hybrids and complex humans makes this a series worth investing in.

A compelling page-turner with depth.