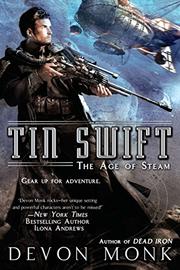 The Age of Steam

Monk (Magic Without Mercy, 2012, etc.) delivers the second installment in her genre-blending Age of Steam series.

Following 2011’s Dead Iron, Monk here delivers an amalgamation of science fiction and fantasy genre elements, told in an alternately hard-boiled and folksy tone. Lycanthrope Cedar Hunt travels on the Old West frontier with, among others, a witch, Hunt’s werewolf brother and engineers specializing in steampunk-style tech, on a quest to find the Holder, a mysterious and powerful weapon. Soon after finding a town inundated by the supernatural creatures known as the Strange, Hunt and company are rescued by the airship Swift. Capt. Hink, who leads the Swift’s crew, wants the Holder as well, and another airship is hot on their trail. The novel is almost a sci-fi/fantasy Mad Lib—a Western-fantasy-steampunk-horror mashup attempting to draw together disparate elements of very different genres. Of all the elements on display, Monk leans most heavily on the supernatural and magical aspects. (She is also the author of the magic-oriented Allie Beckstrom urban-fantasy series.) At times, however, it feels as if the author is throwing together too many things at once; the mere fact that she combines so many different genres means that some are bound to get short shrift. Though there’s plenty of airship action, the steampunk-ish components can feel a bit tacked on and may not satisfy some hard-core steampunk aficionados. Also, for a novel that genre-crunches with such abandon, the story is a grim and serious affair, with relatively little humor. That said, readers of magic-based fantasy and fans of offbeat Westerns may find things to like.

A high-concept but uneven genre combo.