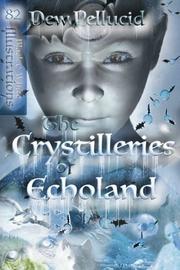 THE CRYSTILLERIES OF ECHOLAND

In this middle-grade fantasy novel, a young hero must ally with his alter ego in an intricate parallel universe in order to rescue his sister and save his own life.

Twelve-year-old Will Cleary was only 2 when he and his twin sister, Emmy, became two of hundreds who “simply vanished” without a trace, whose disappearances were recorded in a dusty tome known as the “gravestone book.” Only Will returned, brought back a week later by Deá and Damian, a wolf and a falcon who became his inseparable companions. Now Will, with Deá and Damian at his side, sets off to rescue his sister. His quest leads him to unexpected, magical destinations, including a land where a boy relived his birthday over and over before uncovering the secret of Echoland, a shadow version of Earth. There, everyone has a translucent counterpart—an “Echo,” who can only live while their “Sound,” or earthly equivalent, remains alive. Will’s Echo, the Prince of Echoland, has dangerous enemies; they plan to murder Will in order to destroy the Prince. Will must negotiate the dangers of this strange world to help the Prince before the murderous Fate Sealers kill them both. Author Pellucid appears as a character in this novel. In Echoland, she creates a complex, detailed world, filled with crystalline imagery. The relationship between Sounds and their Echoes is intriguing, if sometimes confusing, and the narrative weaves in elements of Hamlet (the prince must avenge his dead father) and Christianity (both young heroes were born on Christmas). The plot features several twists as Will painfully learns who his friends and enemies are. Some of the action scenes are chaotic, and there are some grisly scenes, but the suspense is handled well. The ending leaves several loose ends unresolved, suggesting a future third volume.

A gripping, if sometimes dark and perplexing, fantasy coming-of-age novel.