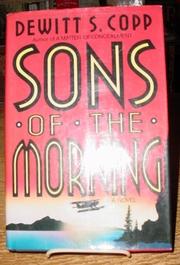 SONS OF THE MORNING

The last notations of an explorer who vanished in darkest Canada pass from hand to hand, traveling from Quebec to Nazi Germany to the postwar US, making mischief wherever they go—in a WW II thriller by the author of A Matter Of Concealment (1989). A series of connected adventures begins and ends at a remote and spooky lake in northern Quebec, where a team of American explorers disappeared in the middle of their search for fossils. The French Indian flyer who took the team to the lake finds a notebook with references to ``gold'' and with a mysterious drawing in the last entries and then tries to discover what had excited the missing men. His search is interrupted by the war, which takes him and the notebook to England and flying duty over France, where the notebook passes first to a young Anglo-French spy and then to a German atomic scientist, each of whom has his own theory about the peculiar drawing and the cryptic notations. At the end of the war, the notebook comes back to the New York foundation that sponsored the original expedition and winds up in the hands of a pretentious young bureaucrat who thinks it will make his career. Amusing characters, hair-raising situations, and loads of period charm more than atone for plot coincidences and a faintly disappointing denouement.