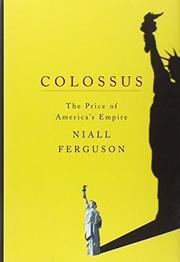 Is America ready to rule the world? Probably not. But, argues the author, it had better gear up to the task.

Prolific British historian Ferguson (History/New York Univ.), who has been building an empire of his own with books such as Empire (2003), The House of Rothschild (1999), and The Pity of War (1999), argues that the US is an empire in fact, with client states scattered around the world. Americans are reluctant to accept this fact for many reasons, although in the post–September 11 climate many more are warming up to the prospect; we’re made uncomfortable by being likened to Rome, Britain, and perhaps even the Soviet Union, by the thought that our financial, military, and cultural might casts a Green Giant–like shadow across the planet. Not that realpolitikers have been unprepared for the eventuality; Ferguson quotes a Bush administration State Department official who, before Dubya even took office, was urging Americans “to re-conceive their global role from one of traditional nation-state to an imperial power.” Well, there are empires and there are empires, and Ferguson suggests that the best of them is a liberal one, one dedicated to the free international exchange of capital, labor, and goods and to upholding the “conditions without which markets cannot function—peace and order, the rule of law, non-corrupt administration, stable fiscal and monetary policies.” Ideologically, at least, Americans should be well-equipped to administer such an empire, but we remain an empire in denial of the sort that “tends to make two mistakes when it chooses to intervene in the affairs of lesser states. The first may be to allocate insufficient resources to the non-military aspects of the project. The second, and the more serious, is to attempt economic and political transformation in an unrealistically short timeframe.”

Prepare, then, for failure—and for agonizing years of involvement in places such as Iraq, Afghanistan, Liberia. Discomfiting, highly provocative reading, with ammunition for pro and con alike.

THE SQUARE AND THE TOWER
by Niall Ferguson
Nonfiction

THE ASCENT OF MONEY
by Niall Ferguson
Newsletter sign-up