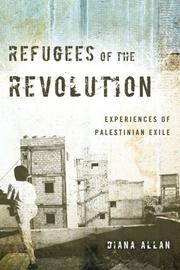 REFUGEES OF THE REVOLUTION

A stern look at how the crippling effects of material deprivation have ground down the will of the Palestinians in Lebanese exile.

A British anthropologist doing her doctoral work at Harvard on Nakba (“catastrophe”) testimonies, Allan imbedded herself in a Palestinian camp in Lebanon and a suburb of Beirut over several years in the mid-2000s to record and observe the lives of the Palestinians there. The results are stark and troubling. Having been displaced since their expulsion from Palestine by Jewish militias in 1948, about 750,000 refugees were forced into neighboring states, with Lebanon absorbing most of these; their long, troubled relationship with their hosts, in the form of PLO provocation during the civil war of 1975-1990, including a horrendous “War of the Camps” between 1985 and 1988, did not ingratiate them with the Lebanese, and the Palestinians are still a people in limbo, with no citizenship and no right to return. Pawns in the political chessboard of the Oslo Accords of 1993 and Taif Agreement of 1989, frustrated by the failure of the Intifada and lack of Israeli-Palestinian agreement, many have migrated elsewhere for a better life, underscoring the remainders’ sense of betrayal and isolation. Employing a methodology called “ethnographies of the particular,” Allan delves closely into the daily life and narratives of these haunted, destitute people. Through many moving examples, the author explores their basic survival and coping strategies—e.g., the use of collective memory, the reliance on communal credit alliances, the ubiquitous stealing of electricity, the practice of “dream talk” to access a future they have no agency over and the desire for the right to live over the right to return.

Deeply conscious of its “solidarity rhetoric,” this valuable study provokes essential questions about the conflicted Palestinian identity in exile.