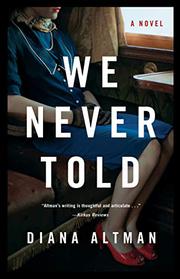 A woman born to an affluent New York family reflects on her upbringing and evolving perceptions of her parents.

Altman’s (In Theda Bara’s Tent, 2010, etc.) latest novel begins with an ominous proclamation: “While cleaning out my mother’s files after she died alone at her secluded house behind a locked gate near the Catskill Mountains, her five cats yowling from fear and hunger, I came upon an alarming letter.” From this document, Sonya Adler learns that many years ago, her mother, Violet, gave up a son for adoption. This discovery causes Sonya to recount her life story, beginning with the moment when she was told her parents would be divorcing. Her mother is the beautiful daughter of a wealthy industrialist; her father is an acclaimed movie producer 20 years her senior. After their separation, the shame of her mother’s unmarried status haunts Sonya’s childhood and shapes her view of relationships into adulthood. Altman’s writing is thoughtful and articulate. Though Sonya’s story includes many formative experiences, such as moving to a new neighborhood, mourning her relatives’ deaths, and falling in love with her eventual husband, the focus repeatedly returns to her mother. Violet is shown to be a complex, at times contradictory person. It is up to readers to decide whether she is petulant or passionate; an irresponsible mother or a woman trying to escape the expectations of a 1950s housewife. Sonya narrates her views on feminist issues and social mores quite earnestly. Many of her anecdotes are compelling and historically revealing, such as her fight to keep her maiden surname when casting a vote. She is admirably cognizant of her own flaws: She admits to being sheltered, changing for people who make her unhappy, and feeling jealous of her sister. But despite its many strengths, the plot is often lacking in conflict. Sonya describes her personal dramas quietly and solemnly, and few are sustained for very long. As a result, the flavor of the story is slightly bland.

While this narrative remains light on action, the author speaks with sophistication and style about the experiences of American women in the recent past.