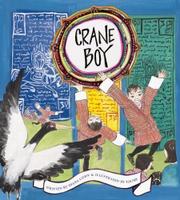 by Diana Cohn ; illustrated by Youme

The black-necked cranes that return to Kinga’s village in Bhutan each winter inspire the schoolboy to convince his classmates and the local monks to create a festival in their honor.

This imagined re-creation of the origin of the annual Crane Festival in the Phobjika Valley, a modern celebration and occasion for environmental education, makes a nice connection to children anywhere who love the natural world. Kinga and his classmates are excited to see the cranes arriving outside their schoolroom window. Their teacher builds on their enthusiasm by taking them to a sanctuary to learn more about the birds, whose numbers are dwindling. This inspires Kinga to suggest the festival. They ask the monks, who sponsor the community’s sacred dances, to help them compose and perform a dance of their own that emulates the movements of the elegant birds. Cohn weaves numerous details about Bhutanese life and culture into her smoothly told story; Youme adds even more with watercolor images in a naïve style that nicely matches Kinga’s present-tense narration. A three-generational family dinnertime scene is especially appealing. Interspersed are images of Bhutanese prayer flags and crane drawings made by schoolchildren during the author and illustrator’s visit to that country. The story ends with further information, a map, and photographs.

Gracefully celebrates both a little-known culture and its beloved birds.