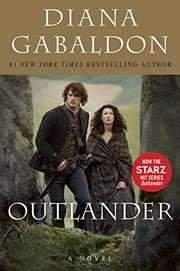 From the Outlander series, volume 1

Once-in-a-lifetime romantic passion and graphically depicted torture sessions are only the two extremes of this lively time- travel romance set in 18th-century Scotland—an imaginative and lighthearted debut by a promising newcomer. World War II has finally ended and Claire Beauchamp Randall, a British Red Cross nurse, has gone off to Scotland with her historian husband, Frank, to try to resume their married life where it left off six years before. Their diligent attempts to make a baby come to a halt, however, when Claire discovers an ancient stone circle on a nearby hilltop, slips between two mysterious- looking boulders, and is transported willy-nilly to the year 1743. Stumbling down the hillside, disoriented and confused, Claire is discovered by Jonathan ``Black Jack'' Randall, an evil English officer who happens to be her husband's direct ancestor and physical look-alike. Randall notes Claire's revealing 1940's summer dress, assumes she is a whore, and attempts to rape her, whereupon she is rescued by the fierce MacKenzie clan, who take her to their castle and confine her there. Claire adjusts to her changed circumstances with amazing ease, using her nursing experience to tend to her hosts' illnesses while she impatiently awaits a chance to return to the circle of stones. Before she can get away, circumstances force her into a marriage with James Frazer, a Scottish renegade from English justice and Jonathan Randall's archenemy. Young Jamie's good looks, passion, and virility soon redirect Claire's energies to defending her stalwart new husband against her former mate's evil clone, and the fierce, courageous but historically doomed Scottish clans against the course of destiny itself. A satisfying treat, with extra scoops of excitement and romance that make up for certain lapses in credibility.