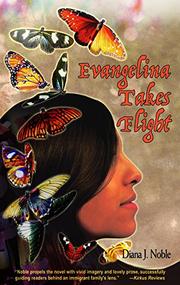 In 1911 during the Mexican Revolution, a Mexican family seeking refuge from Pancho Villa, soldiers, and violence migrates to Texas.

Debut novelist Noble introduces 13-year-old Evangelina de León—a self-aware, observant, caring daughter and sister—her six siblings, parents, and abuelo, who live on a ranch located outside of Mariposa, a small, northern (fictional) Mexican town. Days after her sister’s quinceañera and the news of imminent raids and violence, the family splits up and, in waves, arrive at a relative’s home in Texas. They have not left struggle behind, however. Signs that read “No Perros! No Negros! No Mexicanos!” tell them they are shunned at grocery stores. The political and racial tensions in their new hometown are not subtle: the family is denied a burial for a stillborn son; foreign-born children must use the woods as a bathroom instead of the school’s outhouse; a black boy is shot; a Lebanese kid is harassed; a young Mexican boy is spat upon; and both white children and adults are cruel to the immigrants in the neighborhood. Using the first person with Spanish sprinkled throughout, Noble propels the novel with vivid imagery and lovely prose, successfully guiding readers behind an immigrant family’s lens. Heartbreakingly real scenarios and the family’s perseverance will allow readers to forgive slow-moving sections.

Loosely based on Noble’s own grandmother’s story, this debut hits awfully close to home in the current anti-immigrant political climate.