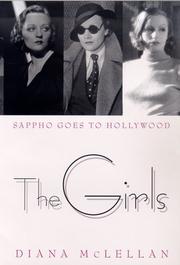 A tell-all account of the glamorous stars of 1930s and ’40s Hollywood who practiced lesbian love.

McLellan (Ear on Washington, not reviewed) has honed her skill at political gossip to a fine art in Washington, writing a popular newspaper column called “The Ear.” Few of the names she outs will surprise even modest fans of film history: silent screen actress Alla Nazimova, Louise Brooks, Talullah Bankhead, Marlene Dietrich, Greta Garbo—to say nothing of Natasha Rambova, the ubiquitous Mercedes de Acosta, and screenwriter Salka Viertel. The juice is in the details. For instance, we learn that for decades Dietrich and Garbo denied they had ever met, even though they were rising stars in Europe at about the same time, came to Hollywood within a few years of each other, and shared friends among Hollywood’s European community. The author thinks she knows why: she has discovered an early German film featuring Garbo in which Dietrich played a minor role. An affair was likely, McLellan speculates, but Garbo kept the lid on by threatening (through Viertel) to expose Dietrich’s connection to Communist spy Otto Katz (allegedly Dietrich’s first husband). The soup of personal and political intrigue thickens as the girls trade lovers and Bankhead and Dietrich keep the phones to FBI director “Jack” Hoover buzzing. There’s even a thin thread that connects Nancy Reagan’s mother to the network. But Dietrich is by far the most interesting character in the mélange, virtually flaunting her sexual escapades with both men and women. She nevertheless earned a medal from the US government for her work in WWII, while Garbo scurried for cover.

Did they or didn’t they? Lively (if largely warmed-over) scandal that should find an appreciative audience among fans of these early film stars and their coteries.