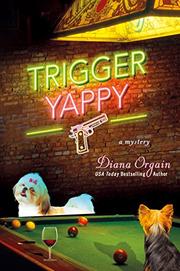 A friend to dog-friends, if not to dogs themselves, investigates a murder that may implicate one of her friends along with everyone else in town.

Days before she’s scheduled to start her new position as a purser on a Caribbean-bound cruise ship, Maggie Patterson gets bad news that threatens to strand her ashore. Apparently her sister, Rachel, has been stricken with a serious case of food poisoning and is being kept at the local Pacific Cove hospital, all but forcing Maggie to take over the operation of Rachel’s wine bar for dog fanciers, the Wine & Bark. It’s not that Maggie (Yappy Hour, 2015) doesn’t like dogs—it’s just that she doesn’t really like them, though her friend Yolanda’s tiny pooch, Beepo, seems to be growing on her. Still, Rachel’s not only her family, but also Maggie’s closest friend—or so Maggie thinks until a surprise visit to the hospital reveals that Rachel has a boyfriend Maggie knows nothing about. It’s not as if Maggie’s own love life is straightforward, divided as it is between two suitors: Gus DelVecchio, a handsome restaurateur and chef who makes Maggie’s heart beat faster, and Brad Brooks, a handsome cop who, as Orgain patiently explains, makes Maggie’s heart beat faster. While Gus is away on business, Maggie enjoys Brad’s company, which takes an unexpectedly professional turn when she finds Fran, an argumentative wine-bar patron, dead and possibly murdered. Maggie can’t resist investigating, if only to make sure Yolanda isn’t involved, though the number of potential perps makes Pacific Cove sound like something more or less than the sleepy and peaceful town it thinks itself.

All the right components—mystery, romance, dogs—but nothing that brings Orgain’s second to the front of the crowd.