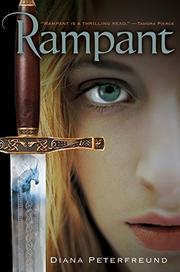 Killer unicorns. They’re supposed to be extinct, the last one killed by Astrid Llewelyn’s great-great-great-great-great-aunt Clothilde, but when one gores her boyfriend in their Seattle suburb, the 16-year-old is sent by her unicorn-obsessed mother to a cloister in Rome. Along with a gaggle of other girls, all virgins, descendants of Alexander the Great and immune to unicorn venom, Astrid trains to be a unicorn hunter and learns more about the mythology—or truth?—of these man-eating creatures, the antithesis of pink and sparkly. Funding the venture and looking for a modern-day antivenin is Marten Jaeger of Gordian Pharmaceuticals. Although it raises ethical and feminist issues, this story line, as well as others, never fully develops. Astrid’s first-person narration reveals her initial skepticism and budding heroism, but leaves most of the other characters flat and stereotyped. The author’s slow-paced YA debut raises many unanswered questions (e.g., how can a 2,300-year-old unicorn the size of an elephant hide in Rome?), but if readers can suspend belief, they will find a fresh folklore twist amid the wave of vampires and zombies. (Fantasy. YA)