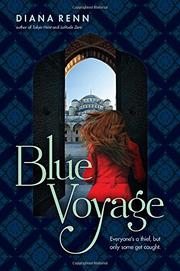 A teen exiled to Turkey for the summer gets wrapped up in a deadly game of smuggle-the-priceless-artifact.

After her father, a Massachusetts gubernatorial candidate, is caught having an affair, 16-year-old Zan Glazer takes to drinking and shoplifting. To escape negative press, Zan and her mother join Zan’s recently widowed aunt for a cruise on the gorgeous Turkish Riviera. Zan, the only person under 18 on a boat full of geezers, is happy to make friends with sophisticated American exchange student Sage Powell, but when Sage exits the tour without warning, Zan finds herself in possession of several valuable—and stolen—pieces of antiquity. Unfortunately, the items are part of a larger smuggling network, and the criminal element believes Zan knows Sage’s whereabouts—and the location of a priceless urn. In a world where heroes might be villains (and the latter might be the former, with satisfying twistiness), Zan can only trust herself to find the missing urn and get to the bottom of a family mystery that may be connected to the larger picture. Almost imperceptibly, Zan, who is used to disguises, both for her father’s sake and to hide the vitiligo slowing taking over her body, learns to be her authentic self in her fight to survive, a believable character arc that suits the plot nicely.

A solid choice for readers hungry for an absorbing mystery.