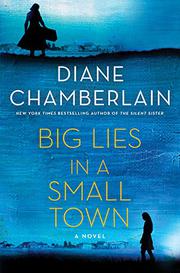 BIG LIES IN A SMALL TOWN

A tale of two artists, living 78 years apart in a small Southern town, and the third artist who links them.

The fates of two white painters in Edenton, North Carolina, intertwine with the legacy of a third, that of Jesse Jameson Williams, a prominent African American artist with Edenton roots. In 2018, the recently deceased Jesse has left a very unusual will. In life, Jesse paid his success forward by helping underdog artists. Morgan Christopher, the last, posthumous recipient of Jesse’s largesse, can’t imagine why he chose her, a complete stranger who is doing time for an alcohol-related crash that left another driver paralyzed. Released on an early parole engineered by Jesse’s daughter, Lisa, Morgan will receive $50,000 to restore a mural painted by one Anna Dale in 1940 in time for a gallery opening on Aug. 5, 2018. If Morgan misses this deadline, not only is her deal off, but Lisa will, due to a puzzling, thinly motivated condition of Jesse’s will, lose her childhood home. In an alternating narrative, Anna, winner of a U.S. Treasury Department competition, has been sent from her native New Jersey to paint a mural for the Edenton post office. Anna has zero familiarity with the South, particularly with Jim Crow. She recognizes Jesse’s exceptional talent and mentors him, to the ire of Edenton’s white establishment. Martin Drapple, a local portraitist rejected in the competition, is at first a good sport, when he’s sober, until, somewhat too suddenly, he’s neither. Issues of addiction and mental illness are foremost in both past and present. Anna’s late mother had manic episodes. Morgan’s estranged parents are unrepentant boozers. And Anna’s mural of civic pride is decidedly strange. One of the strengths here is the creditable depiction of the painter’s process, in Anna’s case, and the restorer’s art, in Morgan’s. Despite the fraught circumstances challenging all three painters, conflict is lacking. The 1940 racial tensions are unrealistically mild, and Jesse’s testamentary testiness is not mined for its full stakes-raising potential.