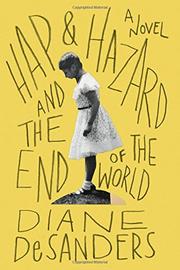 HAP AND HAZARD AND THE END OF THE WORLD

A child yearning for answers to adult mysteries comes of age in this debut novel about post–World War II Texas.

DeSanders’ unnamed child narrator misses the attention she got from her mother when her father was away at war. He returned home, and two babies promptly arrived; she is displaced from the center of her mother’s life. Her father believes in American institutions, traditional family roles. “Daddy believes in General Motors,” she tells us, and “he wants to have things a certain way.” The author captures the veneer of simplicity that followed the second world war. Capitalism, family, and country reign, but DeSanders’ narrator wants to know why. What is truth? Is it built on trust? The author approaches these questions through the eyes of a child who wants to know everything, from the truth about Santa to how the universe works. “It seems like the main thing grown-ups want is for you not to find out anything about what’s real,” she laments. Unfortunately, her father suffers from PTSD and war injuries; his rage keeps his family on edge. The narrator’s world becomes about trying to anticipate the outbursts of a deeply troubled man while helping her mother maintain the fiction of stability. “I decided then to at least go ahead and like Daddy,” she tells us after he is in a giving mood, “on a trial basis.” As the novel progresses, her view of the world eventually becomes predictably more shaded. “There is a change in the universe…,” she says after an altering experience. “The world is plain and flat now, more gray, the mystery and the brilliance gone out of it.”

While it rings true, the novel’s childlike narration may be off-putting to some readers. Readers who can look past that will find a time capsule of American awakening.