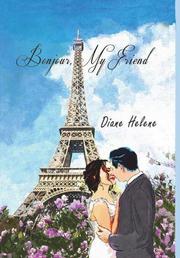 In this debut novel, a young American singer discovers romantic intrigue and danger in Paris in 1960.

At age 19, Alycea Androvna is ready to pursue a career in music, a dream she nurtured throughout a childhood marked by tragedy and poverty. Born and raised in New York, she helped raise her siblings after the death of her alcoholic father. Following the death of her grandmother, she takes her inheritance and leaves New York for Paris, where she plans to spend a year establishing her singing career. A dedicated activist, she joins the Paris-based organization Belief in Animal Rescue Causes. She is hired as a singer at Le Restaurant Ledoyen and catches the eye of Andre Moreau, the owner, and his best friend, Marcus, the place’s business manager. Andre’s business interests also include his family’s cosmetics company, Chez Beauté. She develops a friendship with Marcus and his son, Henri, and discovers the warmth and stability of close family ties. At the same time, she is seduced by Andre’s charm and magnetism. After Alycea is injured in a bombing at BARC headquarters, Andre proposes marriage and she accepts. Andre hopes to start a family as soon as they marry, but Alycea wants to continue her singing career. As their wedding approaches, secrets about Chez Beauté threaten to destroy Alycea’s Paris dream. Helene’s novel is a sweeping romance with dynamic, multilayered characters and vivid settings that moves with the fast pace of a thriller. The story focuses on Alycea’s efforts to establish a singing career in Paris and the complex relationships she develops with Marcus and Andre. Alycea is a winsome heroine whose passion for music is matched by her love for animals and her commitment to their safety and protection. Her involvement with BARC establishes the groundwork for a well-developed subplot involving the group’s efforts to expose companies that engage in product testing on animals. The gripping narrative is told through chapters that alternate between the first-person perspectives of Alycea, Marcus, and Andre as well as several supporting characters, including Andre’s sister, Deirdre, and the heroine’s friends at BARC, Netty and Warren.

An engaging and often riveting story of love, idealism, and betrayal.