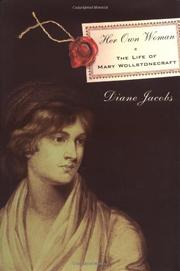 The Life of Mary Wollstonecraft

The life and times of the egotistical but extraordinary woman who challenged family and society to become the first modern feminist.

Mary Wollstonecraft’s famous polemic, Vindication of the Rights of Woman, was published at the height of the French Revolution (whose seminal Declaration of the Rights of Man did not necessarily include females). But her thesis had its roots in the frustrations of her English childhood and youth. Deprived of formal education and limited to jobs as teacher or companion, Wollstonecraft (1759–97) set on a course of self-education, reading Rousseau and Locke while other girls her age favored romantic novels. Jacobs (Christmas in July, 1992) brings fresh insight and detail to her story, thanks to a newly available correspondence that includes letters from her mentor and publisher, Joseph Johnson. The author takes a more tolerant view of Wollstonecraft’s self-centered personality, her inconsistencies, and even her two suicide attempts than Janet Todd displayed in the rather judgmental Mary Wollstonecraft (2000). She helped (some say forced) her sister to leave an abusive husband, and together they opened a school. Although the school failed, it launched Wollstonecraft’s writing career with Thoughts on the Education of Daughters, published by Johnson. Her ideas continued to develop and mature as news and discussion of the French Revolution filled the English press and Parliament. She wrote Vindication of the Rights of Woman in response to Edmund Burke’s critique of the Revolution. Eventually she found her way to France, where she lived through the Reign of Terror, wrote reports to England, took an American lover, and bore his child. Abandoned by Gilbert Imlay, she solidified a friendship with (and later married) the English philosopher William Godwin. She died bearing a second daughter, Mary, who would grow up to write the novel Frankenstein.

A sympathetic introduction to a passionate and remarkable woman.