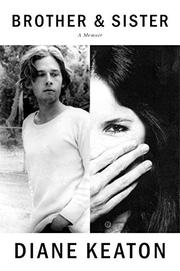 In this melancholic addition to Keaton’s two previous works of memoir (Let's Just Say It Wasn't Pretty, 2014, etc.), she strives to understand her troubled younger brother.

Two poignant passages bookend the author’s brief account of her relationship with her brother, Randy Hall. In the first, she recalls the pair at 5 and 3, sharing a bedroom in their Southern California home, Keaton “glancing down from my top-bunk apartment in the sky and seeing Randy’s anxious bobbing head, his fear of the dark, and his sweet if hapless face….Why couldn’t he stop seeing ghosts lurking in shadows that weren’t there?” The second depicts the siblings, now in their 70s, sitting quietly as Keaton holds her ailing brother’s hand and strokes his hair during a visit to his nursing home. In between these moments of intimacy, Keaton admits to long periods of estrangement from her sensitive, self-destructive, alcoholic brother, who “took failure and wore it the way Hester Pryne wore her scarlet letter,” spending an isolated life writing, collaging, drinking, and existing by grace of the support—financial and otherwise—of his parents and sisters. While never completely free of worry or involvement, the author discloses that “while I was playing the firebrand Louise Bryant [in the film Reds], he’d attempted to gas himself in the garage….I told myself I didn’t have time to linger on my family’s problems, and certainly not Randy’s.” Keaton thoughtfully wrestles with her guilty conscience while attempting to assemble a clearer picture of her brother’s nature. To do so, she relies heavily on excerpts from his poems, prose, and letters and those of family members. Yet Hall—described variously as “a schizoid personality” by a doctor, an “Almost Artist” by Keaton, and a “genius” by his idealizing mother—remains inscrutable and difficult to sympathize with.

Keaton sheds her whimsical persona to explore difficult burdens that those with an unstable sibling will recognize.