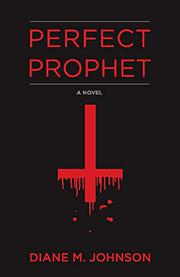 A metal band guitarist realizes he’s an essential part of a satanic cult’s dark prophecy in this supernatural novel.

Alec Lowell takes a gunshot to the heart during a performance with his Los Angeles band, the Great. Though the unidentified shooter gets away, Alec miraculously survives. His near-death prompts a reunion with Belinda Allen, the girlfriend he left years ago. When he learns the two have a son, Jake, Alec returns to Wisconsin with Belinda. While Alec is constantly paranoid that someone is watching him, Belinda suggests he make amends with his estranged family: his father, Brent, and younger sister, Ilene. But Brent, a devout Roman Catholic, had been abusive, which led to the Great’s ostensibly satanic stage performances—though they’re only for notoriety. Alec is later startled by the news that his dad had actually belonged to a satanic cult. Keeping an eye on Alec in Wisconsin is a reputed Great fan, Lucas, who readers know is a cult member. It seems the “secret Satan society” believes Alec is a prophet, who may play a role in the Dark Lord’s ultimate rise to power. But gathering intelligence on the cult is dangerous, as members target Belinda, Jake, and even Alec, when he proves to be an uncooperative prophet. Johnson’s (The Schoharie, 2017) thriller thrives on suspense, because many characters surrounding Alec may belong to the mysterious cult. Supernatural elements slowly creep in but don’t overwhelm the plot; Alec, for one, has an apparent healing capability. While the author truly excels at character development, including Lucas’ unsettling backstory, the men are generally dense and make questionable decisions. But the women are exceptional, from Belinda to the Great’s lead singer, Claire “Cleo” LeCroix, who calls everyone “hon,” a term either affectionate or condescending, depending on whom she’s speaking to. Despite the book’s heavy religious overtones, the story stays fairly middle-of-the-road, attributing good or evil to individuals rather than their beliefs. The final act piles on twists, and though one is predictable, the others are genuinely shocking.