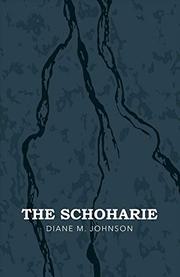 A bridge collapse becomes complicated by an outbreak of Native American sorcery in this debut supernatural thriller.

When a wet spring in upstate New York leads to heavy flooding and the collapse of a bridge over the Schoharie Creek, soccer coach and fireman Aaron Bonner almost drives his pickup into the suddenly gaping chasm on the I-90 thruway. Even more unsettling is the apparition of a Native American warrior in buckskin, war paint, and a braid beckoning Aaron from across the gap. More frightening visions plague Aaron as he does emergency flood work: He sees the warrior, who is invisible to others, scalping the corpse of a drowned motorist and starts hearing the voices of dead people shrieking inside his head. He thinks he is going crazy, as do his girlfriend, Sara Harrigan, and her dad, Ben, a hard-bitten sheriff with a prickly attitude toward him who remembers that Aaron’s half-Iroquois father also exhibited bouts of insane violence before he was killed by police. Things escalate when the warrior manages to cut off Aaron’s toe. The talisman enables the warrior to turn Aaron into a puppet compelled to repeat any act he pantomimes, no matter how horrifying. Johnson creates a believable world of small-town people and first responders with long memories and complex relationships as a setting for eruptions of eeriness. She writes vivid action and flood scenes, filled with “the rush of untamed water, the splatter of the endless downpour, the grunts and shouts of workforce prisoners who heaved sandbags to and fro, and the whining motors of rescue boats fighting a swift current.” In her evocative prose, the novel’s magic feels both realistic and picturesque. (Gathering his powers for a catastrophic strike, the warrior “held out his arms as if presenting the sky with a large and bulky gift,” then “dropped the imaginary package…as if it had gained an obscene amount of weight.”) Aaron’s helpless subjection to a malevolent force that no one else perceives makes for a queasily terrifying read.

An original and imaginative mix of macabre lore and psychological horror.