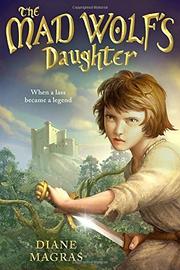 In this fresh take on the chivalric romance, it’s wee lass Drest who becomes a legend as she journeys across 13th-century Scotland’s remote coastal headlands to rescue her da and brothers, the Mad Wolf and his band, from Faintree Castle.

As a bargaining chip, she brings a kind knight traitorously wounded and left for dead by his own men during the raid that took her family. During her six-day quest, Drest rushes headlong to right wrongs wherever she finds them, acquiring a faithful friend and the aid of a powerful witch, both of whom she saves from savage packs of ignorant townspeople. Drest also earns the respect of her captive. Her feats are marked with colorful insults, bruising fights, crashing swords, and daring escapes. Throughout, Drest is heartened by the imaginary presence of her brothers, whose voices she hears in her head, offering battle tips and a code of conduct. But she also learns hard truths about her family’s exploits which make her doubt them and question who she is at her core. Choosing her own code allows her to correct past mistakes and reveal a larger plot that hints at a sequel. While Drest’s literary antecedents are both many and clear, Magras develops her carefully, her ethical arc emerging naturally and believably. An author’s note orients readers to medieval Scotland and its mores.

Action-packed at every turn, the story leaves enough unresolved to leave readers hungry for the continuation of the epic adventure.