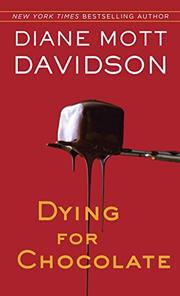 Aspen caterer Goldy Bear (Catering to Nobody) is horrified when her new beau, psychologist Philip Miller, suddenly begins driving erratically, crashes, and dies, while she, right behind in her own car, is helpless. Is there any way in which his death might have been caused by a patient? Among his appointments last week were munitions stockpiler General Farquhar and his wife Adele, who accompanied teenager Julian, their boarder and charity student; and the day before Philip died, he had had lunch with Weezie Harrington, who, to Goldy's surprise, was supposed to be his lover. Did Weezie's lecherous husband kill him? If so, then who dispatched him later on in the week? Goldy again turns to handsome cop Tom Schultz for advice, while trying to sidestep the irrational rages of her own ex-husband. Delving into the pasts of the Farquhars and the Harringtons, she discovers an unacknowledged birth—which is brought to light between Goldy's pig-outs on chocolate. A flat second effort, which weighs Goldy down with a battering former husband (this year's mystery trend), pedestrian menu-planning, and a contrived plot. Son Arch, however, rings true and likable.