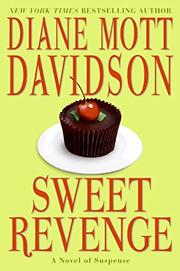 Goldy Bear Schulz, talented caterer and successful sleuth, has a Christmas party everyday—if she can just find the time to cook between solving murders.

Although a charming Dickinsonian repast has been prepared for the Aspen Meadow Library breakfast, everyone loses their appetite when the corpse of shady former DA Drew Wellington, a high-end map dealer, is discovered. Even more disturbing for Goldy is her certainty that Sandee Brisbane, the woman who killed Goldy’s odious ex-husband, was lurking nearby well after she supposedly perished in a forest fire (Dark Tort, 2006, etc.). Both Drew’s partner Neil Tharp and his pugnacious competitor Larry Craddock claim that some valuable maps are missing. Also on the list of suspects are Drew’s girlfriend Patricia, his ex-wife Elizabeth and the elusive Sandee. As they continue to cater for their wealthy clients, Goldy and her talented helper Julian pick up tidbits of information along the way. Despite her policeman husband Tom’s warning, Goldy can’t keep her nose out of the investigation, which becomes more complicated by the murder of Larry Craddock. Goldy crashes her friend Marla’s car in pursuit of Sandee, receives some nasty threats and narrowly escapes death at a snowboarding facility, but she keeps on cooking and sleuthing until she tracks down the murderer.

Not Goldy’s brightest day. Her legion of fans may well prefer the ten appended recipes to the tale itself.