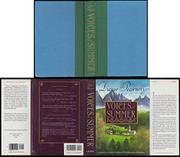 An artless formulaic story from British author Pearson (The Summer of the Barshinskys, 1984, etc.)—all about love and light opera in the Austrian Alps. When the energetic Willi Zimmerman, mayor of the small alpine town of Hochhauser, decided to revive the local economy by turning the old spa buildings into a theater where light opera would be staged in the summer, he enlisted the reluctant help of retired opera-director Franz Busacher. The project has been a surprising success; and when tenor Karl Gesner becomes the star, the audience- -especially the female part—grows even bigger. Karl offstage, however, is not so attractive. Now, as the new season is about to begin, Busacher is desperately searching for a lead soprano who can withstand Karl's ego, his nastiness, and his liaisons. The only candidate is Therese Aschmann—whose once-promising career was blighted by her marriage to an alcoholic singer, who had tried to kill her onstage. Though Therese's looks have faded, her voice has not, and Busacher gives her the job. Rehearsals begin, and we meet the enigmatic but brilliant set-and-costume designer, as well as the rest of the cast, all has-beens or never-will-bes, and the mayor's uptight son, Georg, who can't understand his father's or his girlfriend's love of theater. Meanwhile, the plot unfolds predictably: Therese makes a splendid comeback; the widower mayor is smitten; and villain Karl, jealous of Therese, contrives an ugly crisis—a crisis that will be happily resolved, of course. By the close, Therese has found true love and success—as have a few others. Literary equivalent of down-home cooking—no surprises, just remarkably satisfying on its own terms.